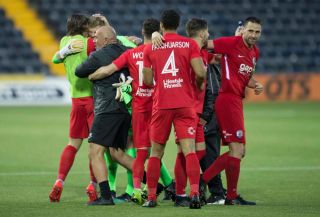 Here, PA takes a closer look at five things about the Flintshire club.

The present-day club was formed as Connah’s Quay Juniors in 1946, being driven by Connah’s Quay native and former Wales and Everton defender Tommy Jones. After limited spells of success, Connah’s Quay were League of Wales founder members in 1992, winning the competition’s League Cup four years later and reaching the 1998 Welsh Cup final in 1998. Following a spell in the Cymru Alliance, they regained Welsh League status in 2012 and have gone from strength to strength, securing top-three Welsh Premier League finishes during the last three seasons and challenging for Europa League qualification, in addition to reaching last season’s Scottish Challenge Cup final.

The Nomads play at the 1,600-capacity Deeside Stadium. Their record attendance was 1,068 for a Scottish Challenge Cup semi-final against Edinburgh City last season. The Partizan Belgrade home tie, though, is set to take place at nearby Rhyl’s Belle Vue ground. Connah’s Quay, itself, is situated six miles west of Chester and has a population of just over 16,000. “The Quay” is Flintshire’s largest town, and its former residents include ex-world darts champion Ted Hankey.

Former Manchester City captain Morrison took charge of the Nomads in November 2015, and he has led the club to consistent success. After being signed by Joe Royle, he played for City between 1998 and 2002, and was once famously sent off for sticking his tongue out at Stan Collymore during a game against Fulham. Scotsman Morrison also played for Plymouth, Blackburn, Blackpool and Huddersfield during a playing career that spanned more than 250 games. His managerial stint at the Nomads has seen them become consistent Welsh Premier League title challengers and Europa League qualification regulars.

Striker Healey is the Nomads’ most successful playing product. He joined the club’s renowned youth set-up in 2009 and scored 12 goals during his Welsh Premier League debut season. He moved on to Cardiff City, making his Premier League debut against Chelsea after going on as a substitute for Craig Bellamy, before moving to Colchester on loan in 2014. He also had loan spells with Dundee, Newport County and Torquay United, and he signed a permanent deal with League One club MK Dons this summer following a successful loan spell last term when he helped them clinch promotion.

You just never know in football.. We all presumed it would be Kilmarnock but @the_nomads have proved everyone wrong.— Partizan Belgrade 🇬🇧 (@FKPartizanEN) July 18, 2019

A 3-2 aggregate victory over Kilmarnock was comfortably the Nomads’ finest Europa League qualifying round achievement, but they are no strangers to the tournament’s demanding qualification process. Their first European campaign in 2016-17 saw them beat Norwegian side Stabaek before going out to Serbian club FK Vojvodina. The following season, a 1-0 home leg victory was not enough to see off HJK Helsinki on aggregate, while this year’s already memorable campaign began with a 5-1 aggregate success against Belarus opponents Shakhtyor Soligorsk before Kilmarnock were sent packing.