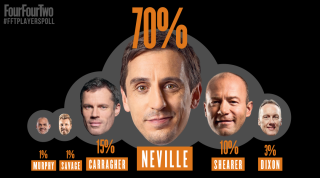 As part of the April 2015 issue of FFT, 123 players currently plying their trade in the Premier League, Football League and Scottish Premier League were quizzed about everything from refereeing to racism in the game.

The answers provided plenty of surprises, although few will be shocked to hear that the former Manchester United defender and current England coach tops the charts with his expert analysis for the satellite broadcaster.

"Neville and Carragher are so good, I enjoy watching them more than the game," enthused one current Championship player, who was backed up by one from League One saying they "have taken punditry to another level."

The responses regarding passionately opinionated BBC and BT Sport pundit Robbie Savage, on the other hand, weren't quite so warming.

"Savage shouldn't be allowed anywhere near a TV," exclaimed a current SPL player, while another contracted to a League Two outfit opined: "Players don't respect Savage, what has he achieved? At least Neville and Alan Shearer can talk with real authority"

"I don't think the magazine could print what I think about Savage's punditry," said one Championship player, with a League Two pro concluding the criticism sympathetically: "I played with Sav. Nice lad, but he's not up to the job."

Read the full Players' Poll in the April 2015 issue of FourFourTwo, available in print and on iPad from March 3, which also features interviews with Lionel Messi, Gareth Bale, James Rodriguez and Frank de Boer, goes cruising for gay fans with Dulwich Hamlet and asks whether the away goals rule should be scrapped.