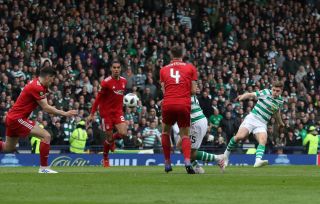 Here, Press Association Sport looks back at their route to the final.

Celtic 3 Airdrie 0 (Fourth Round)
Timothy Weah came off the bench to net on his debut but it was Scott Sinclair who did most of the damage against the League One side. The winger scored twice, had a penalty saved and a goal controversially disallowed for offside. Former boss Brendan Rodgers said: “I feel for Scotty as the (offside goal) is an easy decision. The linesman, bless him, he’s in a really good  position and those are the ones you’ve got to see. It’s obviously cost Scotty a hat-trick.”

Celtic 5 St Johnstone 0 (Fifth Round)
Sinclair got his hat-trick this time as Celtic beat Saints for the third time in 10 days. But he was upstaged by Scott Brown, who blasted home from 30 yards to record his first goal in almost two years. James Forrest netted his sixth goal against the Perth club this season. It was a record 24th consecutive victory in domestic cup ties. “The consequence of it is they break a record, another great tribute to how well they have been working for two-and-a-half years,” Rodgers said.

Hibernian 0 Celtic 2 (Quarter-Finals)
Rodgers departed five days before the trip to Easter Road and Celtic had to negotiate another game in Edinburgh in between. Neil Lennon returned to lead the Hoops to victory over Hearts and then his former club, with Brown and Forrest on target in Leith as they recorded an 11th win in 11 domestic games in 2019. Lennon said: “Forrest and Brown, it was like going back in time to 2010, they were with me at that time. Nine years later, they are still outstanding footballers and for me they are two Celtic greats, still writing plenty of chapters for what time they have got left here.”

Aberdeen 0 Celtic 3 (Semi-Finals)
Celtic eventually cruised to victory against the nine-man Dons, who also had managerial pair Derek McInnes and Tony Docherty sent to the stand. The key moment was a second yellow card for Dom Ball following a late aerial challenge on Ryan Christie, which put the midfielder out of the final. Forrest scored a sensational opener, Odsonne Edouard converted a penalty and Tom Rogic added a brilliant third, just after being the victim of a crude challenge from Lewis Ferguson. Lennon hailed Forrest afterwards: “He’s one of the best players in Britain now. His goal was top-class and set us on another tremendous victory.”