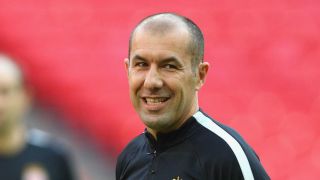 Leonardo Jardim was pleasantly surprised by his bleary eyed Monaco players for rounding off a week of celebration with a 3-2 win at Rennes.

Wednesday's 2-0 triumph over Saint-Etienne secured Monaco's first Ligue 1 title since 2000 and the celebrations appeared to have rumbled on to Roazhon Park as the squad emerged for the warm-up with their hair sprayed in the club colours.

Jardim and his staff also got in on the act with some dashes of red and white face paint, with the head coach's cheeks still daubed as he reflected on a match where Brazilian trio Fabinho, Jemerson and Jorge – the latter on his full Ligue 1 debut – were all on target.

"Everyone showed the big picture of the team," he told L'Equipe, before conceding sleep had not been high on the agenda for his young stars.

"After one or two nights where the guys did not sleep much they showed that quality and rage of winners.

"I think we all had a big season and I'm happy for the group.

"After Saint-Etienne I celebrated with my family, I spent an hour with the players but it is not my habit to control them."

A second-half brace from Rennes substitute Adama Diakhaby, who also hit the post, might have propelled the hosts to a share of the spoils but Monaco were ultimately dominant – much to the wonderment of their boss

"I'm a little surprised that the players had such a good game after so little sleep," Jardim added.