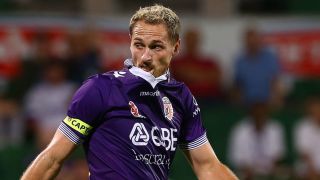 Perth headed into the contest at NIB Stadium on the back of a six-game winless streak and their prospects appeared bleak when Roy Krishna put Phoenix in front in the 11th minute after good work from Shane Smeltz and a terrible error from Glory keeper Liam Reddy.

That was the 4,000th goal in A-League history, but it was Perth that were celebrating in first-half injury time when Griffiths' thunderbolt levelled proceedings.

And the home side completed the turnaround six minutes after the break when Adam Taggart headed home Andy Keogh's cross.

Wellington were unable to muster a response and their task was made even more difficult when Krishna was shown a straight red card in the 62nd minute.