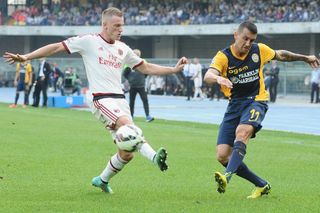 The Italy defender has been linked with a move from San Siro, with Paris Saint-Germain among the clubs reported to be interested in signing him.

Abate has no intention of turning his back on Milan, though, and is eager to extend his stay with the Serie A club.

"My priority is Milan," he told the Gazzetta dello Sport.

"I'll stay here as long as I can. This is my home, although I know in football you can always be moved on.

"I want to stay here and finish my career. I couldn't see myself in another shirt, at least not in Italy. At most I'd go abroad.

"But the time to say goodbye hasn't come. I still get excited when I walk into Milanello."

Milan turned to former striker Inzaghi in June to change their fortunes and Abate has welcomed his appointment.

"The change of coach has been good for me and for the squad. The atmosphere is different now," Abate said.

"I've known Inzaghi for years. He is a maniac, a perfectionist. It's how he was as a player and how he is as a coach.

"What sums up Inzaghi's Milan? The way we embrace after we score - the group is the real strength.

"There are a lot of us, so to keep everyone happy isn't easy, but there are no problems."