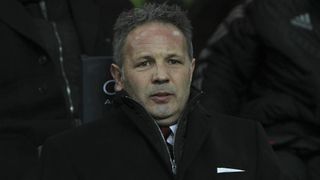 Ignazio Abate insists the AC Milan squad are fully behind Sinisa Mihajlovic, with the full-back eager to see the coach stay at San Siro.

Mihajlovic's position continues to come under scrutiny despite the 2-0 win over Fiorentina last week, with the Rossoneri eight points adrift of the top three after 20 matches in Serie A.

Abate has seen three different coaches appointed in the last two years, with Mihajlovic following Filippo Inzaghi and Clarence Seedorf into the San Siro hotseat, and he believes keeping the 46-year-old in charge could help them to build a strong foundation for success.

When asked for his view on the coaching changes, he told La Gazzetta dello Sport: "I hope it does not happen again. Starting from scratch each year is tough. I'm sorry for Inzaghi, who's a friend and will become a great coach. But now I see solid foundation to start a winning cycle.

"In the eyes of the team - and I'm speaking on behalf of all of us - Mihajlovic is a great man. He gave us confidence and self-esteem.

"We've all improved with Mihajlovic, there's not one of us who doesn't step it up in training. He's charismatic, he doesn't need to get angry.

"This team has a strong foundation, we'll get to a respectable position.

"The target is Europe. Until now we've maybe not shown enough to deserve the Champions League, but it's not mission impossible. I laugh when I hear about a league of low stature - the truth is that it's levelled out. But for now we think of Empoli [on Saturday]."

Abate has also rejected the idea that Milan have spent poorly in recent transfer markets - though he admits a reunion with Zlatan Ibrahimovic would have been something to savour.

"I don't agree. [CEO Adriano] Galliani has built a competitive team. Only Juventus and Napoli have something more," he said.

"I have a strong friendship with Zlatan. When there was talk of him in the summer I had hoped. It would've been nice."