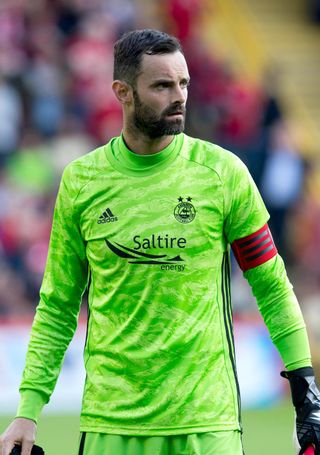 Aberdeen skipper Joe Lewis admits he is jealous of his predecessors who have lifted silverware for the Dons.

Russell Anderson was the last Aberdeen captain to hold a trophy aloft when he collected the League Cup in 2014 in Derek McInnes’ first season in charge.

Lewis joined the Dons two years later and has played at Hampden Park eight times but has suffered three final defeats against Celtic.

Aberdeen can secure a return to Mount Florida if they beat St Mirren in the William Hill Scottish Cup quarter-finals on Saturday night and Lewis has plenty of motivation ahead of the Paisley tie.

“There’s lads in the changing room who have won the League Cup only a few years ago and certainly myself and the other lads that have joined more recently than that want to be part of a team that’s won a trophy at this football club,” the 32-year-old said.

“I’m envious of the photos and the celebrations of winning a trophy and I would love to get my hands on a trophy and lifting that with the team beside me.

“It is a massive game for us. It’s a great opportunity to get silverware.

“The league and the League Cup have come and gone for us and this is the last opportunity for us to win silverware this season.

“It’s something Aberdeen Football Club should be doing, we should be winning trophies.

“It’s something that I have had a strong desire to do since I have been at the club. Saturday is the next step towards achieving that.

“We have got the opportunity to get into the semi-final and we will go down there with that hunger and determination to do that.”

St Mirren did Aberdeen a favour on Tuesday by beating Motherwell, who could have gone four points clear of the fourth-placed Dons in the Ladbrokes Premiership table.

But the Buddies’ follow-up to their Fir Park cup win seven days earlier also gave them a lift ahead of Saturday night’s encounter.

Lewis said: “They will be confident on the back of an excellent result on Tuesday night. It’s a difficult place to go against a very good team in Motherwell.

“When we have played them, they have been a real tough, determined lot and we expect nothing different.

“We need a performance that will get us through that.”