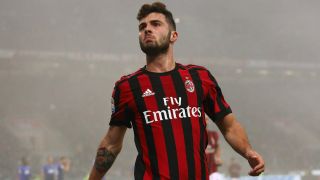 AC Milan made it three wins in a row in Serie A for the first time since March last year as they claimed a 2-1 victory over Lazio on Sunday.

Goals from Patrick Cutrone and Giacomo Bonaventura, either side of an Adam Marusic strike, sealed all three points for Gennaro Gattuso's side and prolonged their impressive unbeaten league run against Lazio at San Siro, which stretches back to 1989.

Simone Inzaghi's side travelled to Milan on the back of a six-game streak without a top-flight defeat, but they looked unsettled from the off as the Rossoneri produced one of their best performances of another difficult campaign.

Cutrone's third league goal of the season was cancelled out by Marusic's fine finish, but Bonaventura's emphatic header restored Milan's lead before the break as the home fans roared their approval.

Lazio threatened in the second half through Sergej Milinkovic-Savic but could not come up with a second equaliser, meaning they are now just two points above fourth-placed Inter.

Milan, meanwhile, are level on points with Sampdoria in sixth and beginning to present themselves as contenders for the European spots once more.

Hakan Calhanoglu had Thomas Strakosha at full stretch with a fierce effort from 25 yards after 10 minutes, although Lazio appeared the more settled of the teams in the opening exchanges.

Milan started to play their way into proceedings and broke the deadlock with 15 minutes played when Cutrone glanced Calhanoglu's free-kick high into the net from six yards out.

The lead lasted just five minutes, though. Lucas Leiva picked out Marusic in space inside the penalty area and the winger cut back onto his left foot before placing his finish into the bottom-left corner, out of Gianluigi Donnarumma's reach.

Luis Alberto came close to giving Lazio the lead, crashing a shot off the top off the crossbar after drifting inside from the left, but Milan seemed the more likely to find the third goal and it took another good Strakoshka save to keep out a Calhanoglu drive.

He could do nothing to stop Bonaventura restoring Milan's advantage two minutes before the break, though, the midfielder racing onto Davide Calabria's brilliant curling cross and powering a header into the net.

2 - have scored two headed goals in a first half of a Serie A match for the first time since October 2011 (vs Roma), in that case the scorers were Ibrahimovic and Nesta. Headers. January 28, 2018

Inzaghi made an attacking change early in the second half, introducing Felipe Anderson for Lucas, and the Brazilian teed up Milinkovic-Savic 12 yards out only for Donnarumma to repel his low strike.

Milinkovic-Savic was posing as the most likely candidate to spark another Lazio comeback and he was again denied by Donnarumma when he rose highest to head Marusic's cross towards goal, before he sent a 20-yard strike into the keeper's grasp.

Substitute Andre Silva almost poked home a late third and Lazio captain Senad Lulic failed to get good contact on a clear late chance from Felipe Anderson's cross, but Milan survived to claim one of their best league wins of the campaign.