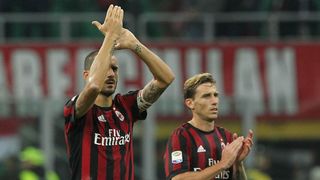 AC Milan chief executive Marco Fassone has acknowledged the Serie A giants would have to sell star players if they fail to qualify for next season's Champions League.

Vincenzo Montella's side sit 10th following a difficult start to the season, with a 3-2 defeat in a dramatic derby against Inter last time out marking their fourth league defeat of the campaign.

Milan - who take on Genoa on Sunday - spent big in the off-season, with Ricardo Rodriguez, Andre Silva and Leonardo Bonucci among their high-profile additions.

However, Fassone has hinted some key players may have to be sold to balance the books should they fail to finish in the Champions League places, though he assures it would not be the end of the club's long-term project.

"It is a plan and an obligation [to qualify]," Fassone told La Stampa.

"The Champions League is fundamental to our project. To miss it, however, does not block the plans.

"We will delay a year and find the system to balance the failure to enter the Champions League with the sale of one or two top players."

Milan's disappointing start has led to the pressure mounting on Montella, and Fassone did little to ease the scrutiny on the former Sampdoria boss.

"We're all under pressure," he added.

"It is needless to think about it though. Here we have to work all in the same direction to find a way out of this.

"The spark is missing. But I'm convinced we will do it."