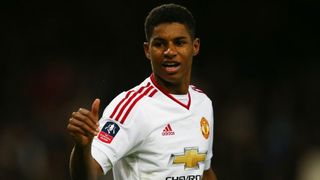 A breakthrough season at Manchester United could be about to get even better for Marcus Rashford, with the striker included in England's preliminary 26-man squad for Euro 2016.

The uncapped Rashford burst onto the scene with doubles in victories over Midtjylland and Arsenal in February, and has now seen off competition from Andy Carroll and Jermain Defoe to earn a place in Roy Hodgson's pre-tournament training group.

Despite Rashford's relative lack of experience, the England boss has seen - and heard - enough to be confident the teenager can go on to be a regular for the national team.

"We have had good feedback from Manchester United on the player," he said.

"We have a good group of forward players and plenty of players who can be in the front positions. If he continues to develop, there is no reason why he cannot become a regular in the England team."

We look at how he has measured up against his new international team-mates across all club competitions this season with the help of Opta data:

NO EXPERIENCE, NO PROBLEM

Since making his debut in February, Rashford has made a total of 16 appearances for United in all competitions, so it is unsurprising he has seen the least game time. Injury troubles have blighted Sturridge's season but he has still been used more than the 18-year-old, while Harry Kane enters the competition on the back of a mammoth season with Tottenham in which he played over 4,000 minutes.

Vardy may have lost out to Kane in the race to be the Premier League's highest scoring player, but the Leicester striker has a superior minutes-per-goal ratio to the 22-year-old. Rashford lags behind the pair, but he has found the back of the net on a more regular basis than Rooney this term, suggesting why Louis van Gaal made him a regular part of his line-up so quickly.

With a composure belying his 18 years, Rashford has shown a knack for hitting the target when finding himself in attacking situations. The teenager has the best shooting accuracy of any striker available to Hodgson, but Kane is close behind and has produced far more efforts on goal across the season.

Not only is Rashford precise inside the box, he comfortably has the best rate for turning his shots – excluding blocked attempts – into goals. It is such finishing that has sent his reputation rocketing and encouraged Hodgson to hand him his first international opportunity. Vardy has the next best chance conversion rate, while Sturridge spurns the most chances of all strikers in the squad.

Despite playing the fewest games, Rashford managed to lay on as many assists as Sturridge and Kane. At times playing in a deeper role for United, Rooney set up five goals for team-mates, but it is Vardy who led the way, showing he is not just about scoring.