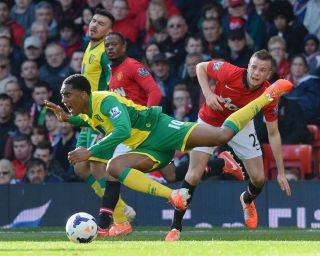 The Premier League's fourth-bottom club applied themselves well during the opening 45 minutes at Old Trafford on Saturday but fell behind to a 41st-minute penalty from Wayne Rooney.

Adams questioned the decision that led to the spot kick, when Steven Whittaker brought down Danny Welbeck, but he offered no defence for his players after the break as Rooney added a second and substitute Juan Mata helped himself to a double to give interim United manager Ryan Giggs a near-perfect start.

"I think we did really well in the first half and frustrated them but then five minutes before the break they get a penalty," Adams told Sky Sports.

"There is minimal contact and that changes the game.

"In the second half we were not good enough. We allowed Wayne Rooney too much time and space to get in a shot and we did the same last week against Liverpool when Raheem Sterling scored.

"We had a go after that but it is difficult when you are 2-0 down away from home.

"I felt we should have done better. We have got two games left and probably have to take points from them (to stay up)."

The games in question for Norwich are against Chelsea and Arsenal, concluding a difficult run-in that leaves their top flight status in severe danger, as they sit one point above the drop zone.

But Adams is determined that his squad's heads will not drop following a third loss in as many matches since former manager Chris Hughton's dismissal.

"Overall, it wasn't good enough but we are still above the (relegation) line," he added. "What we can't do is beat ourselves up. We have to believe in ourselves and give everything we have got for the last two games."