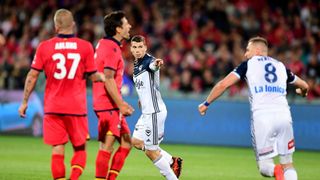 The visitors went ahead in the 13th minute, when Besart Berisha got on the end of Leroy George's inviting free-kick to open his account for the season.

The United midfielder followed that rare goal with his second of the match after the hour, steering in right-footed from the edge of the D.

A spectacular brace by Vinnie Lia and a share of the spoils in a spirited affair. October 20, 2017

But Adelaide were unable to edge ahead of Melbourne City and Sydney FC at the summit as Austin pounced on the rebound after Lawrence Thomas saved from Berisha to chalk up the Victory's first point of the campaign.