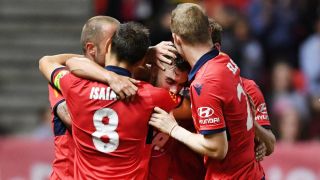 Adelaide United have moved up to fourth in the A-League thanks to a straightforward 3-1 win over rock-bottom Wellington Phoenix on Friday.

Phoenix held their own for much of the first half, but Adelaide broke the deadlock just before the interval and there was to no stopping the hosts from there.

Johan Absalonsen opened the scoring with this third goal in as many games, evading his marker to head in a cross.

United doubled their lead in the 61st minute through Ben Garuccio, who embarked on a powerful run before blasting an emphatic finish into the roof of the net from close range.

And a third followed soon after – Nathan Konstandopoulos stabbing in from 10 yards after brilliantly dragging the ball away from a defender.

The visitors pulled one back late on through Logan Rogerson's penalty after Ersan Gulum tripped him, but it was too little, too late.

Adelaide move up to fourth while the Phoenix remain rock bottom.Highlights: March 30, 2018