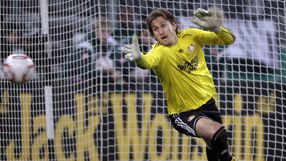 "Missing out on the World Cup is out of my mind, even though it was bitter," Adler said on the German football federation's website.

"I would prefer not to reflect more any more on what happened. It's football but life goes on."

Adler had just established himself as Germany's first-choice goalkeeper when he had to undergo surgery on a rib injury little more than a month before the World Cup started in June.

He described it as the most difficult decision of his life.

Manuel Neuer, who will be substitute on Wednesday, has since taken Adler's place.

"Euro 2012 is still a long way off," added Adler. "First of all, I'm just thinking about Wednesday's game, I'm just happy to be able to play again."