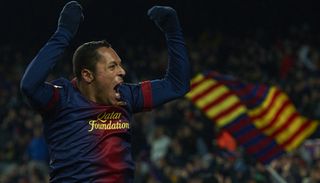 The Brazilian, who was signed from Sevilla in 2010, has a buyout clause of 90 million euros.

"He's become known as one of the most versatile players on Barcelona's roster," Barca said.

"He's performed well in the centre-back position, as well as the right and left full-back positions, and as an attacking midfielder."

The 28-year-old, who moved into the centre of defence to help cover for injuries this season, has scored 10 goals in 105 matches for Barcelona.