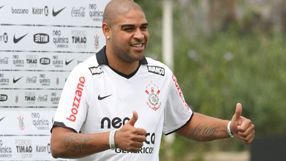 "My objective is to return to the national team. I'm certain I can do it," the 29-year-old said at his official presentation as a Corinthians player.

The former Inter Milan striker signed for Corinthians until June 2012 after leaving AS Roma where he played little and failed to score during an injury-plagued season.

Adriano is recovering from a shoulder injury and has no set time for a comeback though he is aiming for the start of the Brazilian championship which begins at the end of May.

Having begun his career at Flamengo, he had hoped to return to the club he helped win the Brazilian championship in 2009, scoring 19 goals.

"Flamengo is a part of my life, I'm a bit sad, but today I'm very happy at Corinthians. I can't wait to play again," he said.

Adriano, nicknamed the Emperor in Italy, will be looking to regain the form that once made him a feared striker in Serie A and won him nearly 50 caps for Brazil.

He said he had put behind him off-field problems including a love of partying and a drinking habit that led to his premature departure from Inter Milan in April 2009.

"The problem I had was a long time ago, I don't have that any more. I don't escape from the things I did, I accept my responsibility," Adriano said.