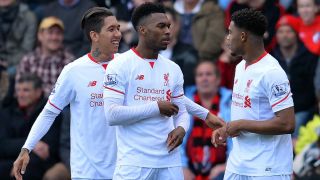 Liverpool ended a memorable week on a high as they moved level on points with Southampton in seventh with a 2-1 Premier League win away to AFC Bournemouth on Sunday.

Jurgen Klopp made 10 changes to the side that recorded the remarkable Europa League comeback win over Borussia Dortmund, handing a top-flight debut to goalkeeper Danny Ward, but two goals late in the first half from Roberto Firmino and Daniel Sturridge gave them an advantage they never appeared likely to surrender.

Bournemouth, though not mathematically safe, looked like a side already beginning to wind down for the end of the season and rarely had Liverpool's makeshift defence troubled before Firmino tapped home a 41st-minute opener.

Sturridge headed in a second soon afterwards and hit the post early in the second half, as Liverpool enjoyed a far more straightforward encounter than they did at Anfield on Thursday.

Marc Pugh twice forced Ward into action before Joshua King pulled one back in stoppage time for Bournemouth, yet the visitors were still able to see out a win which takes them back into contention for at least a top-six finish.

Bournemouth set about pressing the much-changed Liverpool defence from the off, though Tommy Elphick's header straight into the hands of debutant Ward represented the best opening of the first 20 minutes.

Artur Boruc saved comfortably from Kevin Stewart's placed effort but he showed far more agility to claw the ball away from the near post after Steve Cook's attempted clearance rebounded off the legs of Sturridge.

But Boruc could do nothing to prevent Klopp's side from snatching the lead just before the break. Sturridge's clever back-heeled attempt was superbly saved by the Poland goalkeeper, only for Firmino to arrive and to tap home on the line.

Sturridge himself doubled the lead right on half-time, rising unopposed to head Jordon Ibe's free-kick from the left beyond Boruc and into the far corner.

A fumble from Boruc gave Firmino the chance for Liverpool's third within three minutes of the restart, but the Brazilian could only hook his half-volley wide, and Sturridge's brilliant chip clipped the bottom of the post just five minutes later as the visitors assumed complete control.

Bournemouth had scarcely threatened Ward's goal in the opening hour, but substitute Pugh at last brought a save out of the youngster, cutting inside Lucas from the right and shooting low into the keeper's midriff.

Pugh was denied again by a combination of Mamadou Sakho's challenge and Ward's right hand as he again raced clear into the area, with Eddie Howe's side at last beginning to offer some sustained pressure on the Liverpool goal.

Sturridge rattled the crossbar after Callum Wilson saw a header superbly saved by Ward, but Bournemouth did snatch a lifeline in injury time as King controlled expertly on the chest before rifling a half-volley beneath Ward from the edge of the area.

Cook headed narrowly over in the final seconds but Bournemouth could not find a dramatic equaliser, meaning they remain 13th.