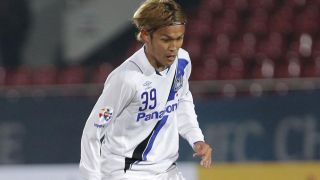 Gamba sit bottom of Group F and are the only team in the group without a point and without a goal after two matchdays heading into Wednesday's showdown against leaders Buriram United of Thailand.

Buriram are two from two so far as they prepare to travel to Osaka Expo '70 Stadium in Suita, while Seongnam and Guangzhou R&F have both collected three points to date.

However, Usami has not given up hope of helping Gamba add to their 2008 Champions League triumph.

"I want to become Asian champions," the 22-year-old told FIFA.com.

"We are an attack-minded side. Our strengths lie in our aspiration for success and aggressive mentality."

Persepolis, Beijing Guoan and Guangzhou Evergrande are all bidding to preserve their perfect records in the competition midweek.

Iranian outfit Persepolis top Group A thanks to clean-sheet wins over Bunyodkor and Lekhwiya heading to Al Nassr in Saudi Arabia on Tuesday.

Bunyodkor and Qataris Lekhwiya - level on one point apiece - clash in Uzbekistan on the same day.

Group G leaders and Chinese giants Guoan are yet to concede a goal and sit atop the standings as they prepare to entertain winless Urawa Reds of Japan.

Guoan have claimed successive 1-0 victories against Suwon Bluewings and Brisbane Roar, who host the Korean club on the Gold Coast on Wednesday.

The Wanderers travel to Korea for their match against Seoul on Wednesday, with both teams sharing three points each.

The remaining fixtures on Tuesday all come from Group C, with Al Sadd playing Lokomotiv and Al Hilal travelling to Foolad.

Group B leaders Pakhtakor will be looking to extend their unbeaten streak to three matches when they host Al Ain on Wednesday.

Naft Tehran and Al Shabab are also in action on the same day.