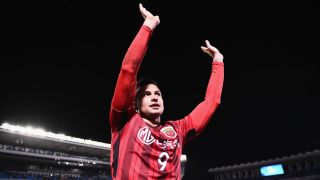 Shanghai SIPG became the second club through to the AFC Champions League knockout stages courtesy of a 1-0 win at Ulsan.

Brazil striker Hulk teed up compatriot Elkeson for the only goal in the 50th minute, securing the Chinese club a five-point lead in Group F and a place alongside Al Duhail in the last 16.

Defeat left second-placed Ulsan level on five points with Melbourne Victory, who had Kosta Barbarouses to thank for a dramatic late 1-0 victory over Kawasaki Frontale.

New Zealand international Barbarouses beat Jung Sung-ryong at his near post in the 90th minute to give the hosts a precious three points.

In Qatar, Xavi scored the opening goal in a 4-0 rout of Nasaf Qarshi that saw Al Sadd keep pace with Persepolis.

Abdelkarim Hassan, Baghdad Bounedjah and Jugurtha Hamroun were also on target for the hosts, who are now top of Group C.

Persepolis appear well-placed to join them in the knockout rounds following a 1-0 win away to struggling Al Wasl, Kamal Kamyabinia heading the only goal in the 37th minute.

Kamyabinia's effort means Al Wasl, beaten in each of their first four matches, are now officially are out of the competition.

Kashima Antlers remain on course to progress despite being held to a 1-1 home draw by Sydney FC.

Dejan Damjanovic and Choi Sung-kuen were both on target to give the Korean club a four-point buffer to third-placed Shanghai.