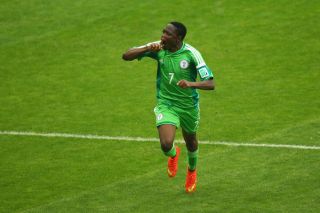 Under-fire coach Keshi claimed his side's qualifying campaign was being "sabotaged" ahead of the Group A clash in Abuja, with the African champions bottom of their pool following a 1-0 defeat against Sudan at the weekend.

Nigeria really needed a victory in order to give themselves a fighting chance of qualifying for next year's tournament in Morocco and they finally got their first group win at the fourth attempt to ensure they moved above Sudan into third place.

CSKA Moscow forward Musa opened the scoring three minutes into the second half, but Salah Al Jizoli stunned Nigeria with an equaliser only seven minutes later.

The Super Eagles were not to be denied, though, and Aaron Samuel marked his full debut with a goal to put them back in front before Musa eased the tension with a third goal after 89 minutes.

Neither side really got going in a disappointing first half, but Bakri Abdelgadir - the scorer of Sudan's winner in the reverse fixture - could have put the visitors in front just before the break when he raced into the penalty area and fired wide.

The game came to life in the second half, sparked by a clinical finish from Musa following great work from John Obi Mikel.

Musa raced to the touchline to celebrate with Keshi, but Sudan responded and silenced the crowd as Salah struck from just inside the six-yard box after being picked out by Abdelgadir.

Nigeria knew only a victory would do and Samuel capitalised on a mistake from Akram El Hadi Salim to prod the ball home with his left foot after 66 minutes.

Musa then sealed three precious points when he cut inside and finished with his right foot.