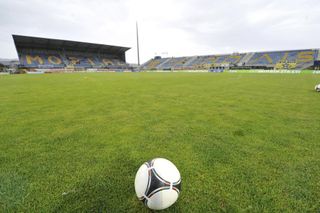 South Sudan were competing in their first Cup of Nations match since the nation gained independence in 2011, but could not celebrate the occasion with a performance to match.

Josemar put the hosts ahead inside 13 minutes, with centre-back Mexer doubling the advantage just before the interval.

Sonito grabbed a quickfire double after half-time and Isac Carvalho put the gloss on the scoreline for the home side.

The fixture's second leg will be played in Sudanese capital Khartoum due to ongoing civil unrest in South Sudan.

Faneva Andriatsima opened the scoring for the hosts from the penalty spot and Carolus Andriamatsinoro put Madagasacar two to the good before the half-hour mark.

Johann Paul wasted a chance to put Madagascar three up when a second spot-kick was awarded, before Hamis Kiiza made no mistake from yet another penalty to give Uganda an away goal and renewed hope ahead of the second leg.

Kenya, Liberia and Tanzania each grabbed 1-0 wins over Comoros, Lesotho and Zimbabwe respectively.

Libya will hope to make up for the disappointment of 2013 in their qualifying campaign.

Set to host last year's tournament, the country saw the event moved to South Africa due to civil war and subsequently lost their automatic spot.

They began their campaign this time around with a 0-0 draw against Rwanda in a game played on neutral territory in Tunisia because of security concerns.

The day's other three games each saw draws. Sierra Leone grabbed an away goal in a 1-1 tie at Swaziland, while Central Africa Republic could not find a way past Guinea-Bissau and the encounter between Burundi and Botswana also ended goalless.