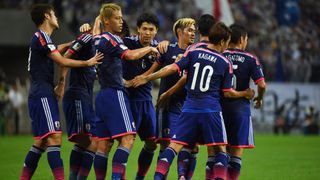 Japan head to Iran for a World Cup qualifier against Afghanistan, looking to get their campaign going.

Vahid Halilhodzic's men made a slow start to qualifying after being held to a 0-0 draw by Singapore in their Group E opener in June.

The Asian giants claimed an important win on Thursday, overcoming Cambodia 3-0 at home to sit third in the group.

Keisuke Honda, Maya Yoshida and Shinji Kagawa were on the scoresheet for Japan as they eased the early pressure on Halilhodzic and ended a four-game winless run.

The Bosnian coach had been told by the Japanese Football Association in the lead-up to that clash that his job was under no threat.

Japan's next four qualifiers are away from home and they are expected to top a group that is currently led by Syria.

They did dominate Cambodia and only missed chances cost them a bigger victory.

Japan have met Afghanistan just once before, claiming a 2-0 win.

Afghanistan's second qualifying round has included a heavy loss to Syria and 1-0 win over Cambodia.

They suffered a 2-0 loss to Thailand in a friendly in Bangkok on Thursday as they prepared for the Japan clash.

And Slaven Skeledzic's men have nothing to lose against Japan at the Azadi Stadium in Tehran.