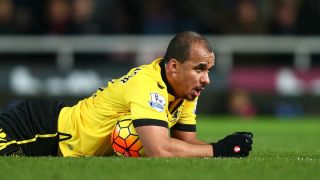 Gabriel Agbonlahor has apologised to Aston Villa fans for his recent problems off the field and stepped down as club captain.

The striker, 29, is set to return from his second suspension of the season after allegedly being pictured using laughing gas while partying with friends just hours after Villa were relegated to the Championship having lost at Manchester United.

Agbonlahor announced the news on Instagram, writing: "I want to begin with an apology to all Aston Villa fans for my actions in recent weeks, especially at a time when it is devastating for everyone involved with the club.

"I am stepping down as club captain with immediate effect as I do not deserve to carry out the role anymore. This role was a huge honour to me and it hurts to have lost it.

"I am asking Aston Villa fans for forgiveness as I'm hurting as well despite reports and photos in the press making out otherwise."

Agbonlahor is the longest-serving player at Villa, but has received criticism for his performances this season and was put on a personal fitness regime after returning from a March holiday to Dubai out of shape, which had earned him another suspension while the matter was investigated.

He added: "I agree my performances this season have not been good enough but I will be working hard to make things right. Up The Villa, Villa Till I Die!"

Villa released a statement on Thursday confirming the player's decision to give up the captaincy and revealing he had received a heavy fine.

Agbonlahor, who has only scored one Premier League goal all season, will miss Saturday's trip to Watford before returning to training on Monday.

"The player has received a substantial fine and been reminded of his responsibilities as a professional footballer at Aston Villa.

"His suspension is now lifted and he will be available for selection from Monday. Gabby has also advised he wishes to relinquish the role of club captain."