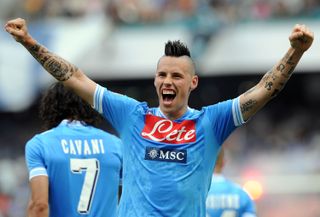 The Slovakia international penned a contract extension earlier in the month, keeping him at the Stadio San Paolo until 2018.

Napoli have lost stars such as Ezequiel Lavezzi and Edinson Cavani in the last two seasons, while manager Walter Mazzarri left to take over at Inter in May.

Mazzarri has since been replaced by Rafael Benitez, and the likes of Gonzalo Higuain, Jose Callejon and Dries Mertens have been brought in to reinforce the club's forward line.

However, while he knows the revamped squad may need time to settle, Hamsik's represenative Juraj Venglos has insisted the 26-year-old is committed to Napoli.

"The boy is happy to play for Napoli and he will remain with the Azzurri for many more years to come," Venglos to Radio CRC.

"He's married the project here by renewing his contract and he knows that the team continues to grow year by year.

"They are now back in the Champions League and he’s very happy about that.

"The squad has been reinforced with a lot of players from abroad, but it won't be easy.

"But Marek is happy with new boss Rafael Benitez and there is already a good understanding with Gonzalo Higuain."