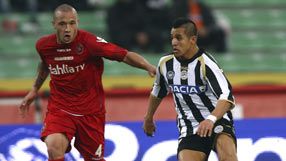 The skilful winger may well be on his way to Old Trafford, with the player’s agent confirming United have made contact regarding a deal.

Fernando Felicevich told Sport.co.uk: “Yes they [Manchester United] are watching him, and it could be a possibility in the future. I have heard that another Premier League club also enquired, but they didn’t contact me. For the time being the only thing I have heard is from Manchester United.

“The Premier League is a very interesting destination for Alexis, but it is only Manchester United at the moment. The price? I don’t know, it is up to the club, it is not for me to discuss transfer fees."

Sanchez’s fast feet and trickery is a playing style which is often compared to that of former United sensation Cristiano Ronaldo.

Ferguson has reportedly been interested in Sanchez, who was one of Chile's shining lights at the World Cup in the summer, ever since Ronaldo left Old Trafford for the Bernabeu.

Antonio Valencia was brought in from Wigan, but is not a a direct replacement for the former FIFA World Player of the Year. Sanchez could bring the thrill factor back to Old Trafford following the departure of the Portuguese.