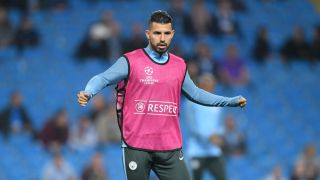 Aguero sustained the injury when a taxi he was travelling in crashed into a lamppost in Amsterdam less than 48 hours before the Premier League leaders signed off for the current international break with a 1-0 win at Chelsea.

It meant the 29-year-old was ruled out of Argentina's goalless draw with Peru and must watch on as Jorge Sampaoli's side try to salvage their 2018 World Cup qualification hopes in Ecuador.

A statement released on City's official website suggests Pep Guardiola's medical team are closer to the mark, with Aguero confirmed to have taken part in a "light session" on Tuesday, ahead of Pep Guardiola's side returning to action at home to Stoke City on Saturday.

Aguero has seven goals in eight appearances this season and is one shy of Eric Brook's all-time club scoring record on 177.

City return to Champions League action at home to Napoli after the Stoke match, having won each of their first two Group F matches versus Feyenoord and Shakhtar Donetsk.