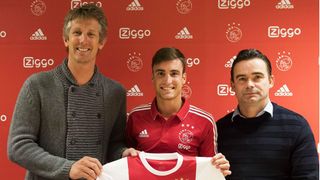 Argentina international Nicolas Tagliafico's switch from Independiente to Ajax has been completed.

Left-back Tagliafico signed a four-and-a-half-year contract in Amsterdam on Friday and joins for an undisclosed fee.

The 25-year-old made his Argentina debut last June as Jorge Sampaoli guided the Albiceleste to a 1-0 victory over Brazil in his first match at the helm.

Tagliafico, whose only previous spell in Europe was a season on loan at Real Murcia in the Spanish second tier, was a key member of the Independiente side that won the Copa Sudamericana in December.

His arrival came on a busy day for Ajax, who also announced a two-year contract extension for Donny van de Beek, who is now tied to the club until June 2022.