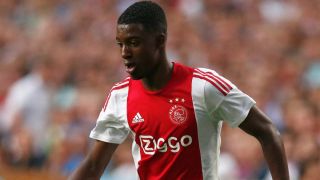 Ajax's 1-0 win in the Eredivisie on Sunday has been marred by reports midfielder Riechedly Bazoer was the subject of racist taunts from a section of ADO Den Haag supporters.

Amin Younes scored the only goal of the game as Ajax stayed four points clear of PSV Eindhoven at the top of the table.

However, reports emerged that Bazoer, who is of Curacaoan descent, was taunted with "jungle noises", with the Royal Dutch Football Association (KNVB) announcing they will be investigating the incident.

"Jungle sounds are awful," they tweeted. "We will put the images and reports forward to the prosecutor of professional football."

"I could not believe it because they also have many players with that skin colour running around," De Boer told FOX Sports.

"I told Hennie Spijkerman [Ajax assistant coach] 'Do they do jungle sounds?'

"It does not belong on the field, and outrageous it happens in the Netherlands."