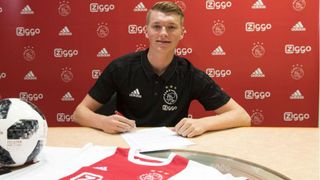 Ajax have snapped up teenager Perr Schuurs from Fortuna Sittard after reported interest from Liverpool.

Talented centre-back Schuurs has agreed a four-and-a-half-year contract at the Amsterdam ArenA, but will be loaned back to second-tier side Fortuna for the remainder of the season when the deal goes through on January 1.

The defender was named captain of Fortuna ahead of the 2017-18 season, at the time just 17 years old, having impressed in his debut campaign with the first team.

Schuurs had been touted as a candidate to strengthen Liverpool's under-fire defence, but he felt Ajax was the right fit despite talking to other suitors.

"It is a dream to be able to play at a top club like Ajax," he said in a statement on Fortuna's official website.

"There were several clubs interested and I also spoke with other clubs, but my feeling at Ajax was immediately very good. I think that's important."

Ajax director of football Marc Overmars said: "He knows what is required of him to be able to reach the top. The fact that he is already captain at Fortuna Sittard at this young age also says something about his personality.

"We are pleased that we have been able to sign this great Dutch talent."

Ajax also announced the signing of Boureima Hassane Bande from Mechelen this week.