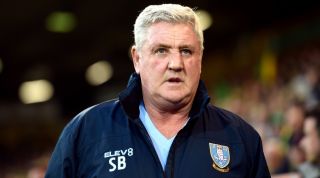 Benitez left the Magpies at the end of his contract after a breakdown in his relationship with the club hierarchy.

And Shearer, Newcastle’s all-time top scorer, revealed in The Sun that his advice to fellow Geordie Bruce was to steer clear of Mike Ashley’s club.

“I was out for dinner with Steve Bruce three weeks ago,” he said.

“It was just after Rafa Benitez had left Newcastle and we spoke about what he should do if he was approached and offered the job.

“I said: 'Why are you going to be any different to Keegan or Benitez? If you take it, you must be mad because you know how it works there.'

“But Steve is his own man and I respect that. I can’t tell him what to do, even though he is a good friend of mine.

“He was not Newcastle’s first choice to replace Rafa. He might not even have been their second, third or fourth pick.

“It looks more like he could have been the last man standing – and Newcastle just knew he would probably take the job because he has always wanted it.”

Sky Sports has reported that Bruce could be handed more than £90 million to spend in the transfer market this summer.

However, Shearer pointed out that the manager’s time is running out to form a competitive squad, with the Premier League deadline set for August 8.

“This is without a doubt the toughest and most toxic situation Steve has ever walked into,” the former England striker said.

“No job is impossible but this one is very, very difficult for so many different reasons.

“On the playing side, he is inheriting a squad that is wafer-thin.

“Newcastle’s two top scorers from last season – Ayoze Perez and Salomon Rondon – are no longer there and they are the only Premier League club not to have made a signing this summer.

“Steve is at a disadvantage already because all the other clubs have had weeks to plan and will have stolen a march on him.

“He’ll do a good job just to keep Newcastle up this season.”