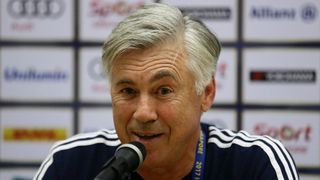 The three-time Champions League winner has arrived in Naples ahead of the new season, with the popular Maurizio Sarri set to be confirmed as the new manager of one of Ancelotti's former clubs, Chelsea.

After the first four days of pre-season training, Albiol has been impressed by the new man in charge.

He told Radio Kiss Kiss: "Ancelotti is a winning coach and he is transferring his mentality and his ideas.

"We are working with one of the greatest tacticians in the world and this is a great opportunity for us, we have to follow his instructions and assimilate his way of playing football.

"It's normal that having such an important manager gives us motivation and a great desire to do well right from the start.

"We are assimilating his ideas even if it is still early, and the group trains with enthusiasm because we want to be ready to face a great season."