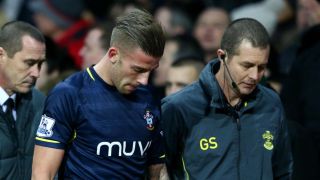 The Belgian suffered the injury during Southampton's 1-0 win over Manchester United on January 11, having previously been a key member of Koeman's back four following his loan switch from Atletico Madrid in September.

While Alderweireld will miss Saturday's Premier League clash with West Brom, Koeman confirmed he could be back in the reckoning for Tuesday's visit of Crystal Palace.

"Toby is close to being back but not available for this weekend," Koeman told reporters.

"We have good hope he will be fit enough for next Tuesday. After Saturday, it's good news that he's pretty close to being back.

"It's always frustrating for everybody, for the manager as well because we'd like to have everybody available and competition between the players in the squad.

"He's the last player who has to come back other than Jay Rodriguez and Emmanuel Mayuka. That's important."