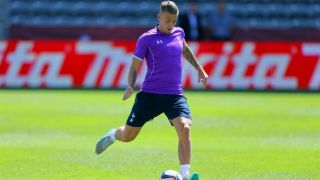 Tottenham defender Toby Alderweireld is confident his team can finish in the Premier League's top four this season.

The Belgium international joined Mauricio Pochettino's side from Atletico Madrid in July, in a deal believed to be worth £11.5million.

The race for a top-four finish in the league is set to be hotly contested again, with Chelsea, Manchester City, Arsenal, Manchester United and Liverpool all battling Spurs.

Alderweireld, 26, believes Pochettino's men are capable of a top-four finish for the first time since 2011-12.

"Well, we have to see. We have a young, talented group with a lot of potential," he said.

"We want to finish in the top four so that is going to be difficult, it always is in the Premier League.

"We are confident in ourselves to achieve that."

Tottenham are in United States preparing for a clash against the MLS All-Stars in Colorado on Wednesday.

Alderweireld said the encounter was an important one for Spurs, who are preparing for their Premier League opener against Manchester United on August 8.

"We take it quite seriously of course because we are in the pre-season and we have to prepare for the game in two weeks in the Premier League," he said.

"I think they are playing against Spurs so they will want to show themselves off and it is going to be a nice game I think."