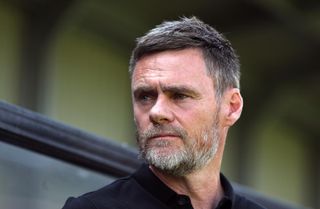 Graham Alexander knows Salford’s ascent, eye-catching signings and status have made them pantomime villains, but it is pressure the club continue to embrace as they push for a Wembley return.

The fiercely ambitious Ammies face a tough trip to Newport in the Leasing.com Trophy semi-finals on Wednesday evening, when the visitors will attempt to keep alive hopes of punctuating their first ever campaign as a Football League club with a trophy.

Alexander has already taken Salford to Wembley, where they triumphed in last year’s National League play-off final to continue the club’s breakneck rise from the Northern Premier League Division One North to Sky Bet League Two since 2014.

That is when Singaporean billionaire Peter Lim and the ‘Class of 92′ rolled into town, with Manchester United greats Ryan Giggs, Gary Neville, Phil Neville, Paul Scholes, Nicky Butt and David Beckham all currently holding a 10 per cent slice.

Such profiles, associated money and TV documentaries have seen Salford ruffle feathers when securing four promotions over the last five seasons, but boss Alexander is happy shouldering that pressure.

Put to him that City appear to be the pantomime villains of the lower leagues, he told the PA news agency with a laugh: “Yeah, I know what you mean! I’ve actually said that myself.

“It’s a bit like a panto and there’s always someone that’s got to tick the box of certain characters and we seem to have had to tick the box of, like you say, the villain of the piece and the one people like to beat.

“We understood that really early on, in our first two or three games as a coaching staff. I think the club were aware of it in their previous seasons as well.

“I think it’s something that we’ve had to get used to, but I do believe it sort of adds a bit into our planning and preparation and into our players’ mentality, where we know we have to be our best to overcome the opponent because the will to beat us is there.

“I wouldn’t like to disrespect opponents saying ‘they only want to beat us and not other clubs’. I don’t think that’s correct. I think everyone wants to win games for their own reasons, regardless of the opponent, so I think it’s important to state that fact.

“But I think there’s a touch more enjoyment for the opposition if they did beat us – certainly from supporters, anyway. We felt that.

“We don’t mind. Listen, we do mind getting beat but we understand what it’s about, and the profile of the club goes before us when we get to a ground but it’s just another thing to overcome, really.”

Salford sit 11th in League Two, eight points shy of the play-offs, and a swathe of recent additions – including Premier League winner Darron Gibson and another former United player, James Wilson – looks to have set them up well for the remainder of the season.

League Two success remains the focus but winning the Leasing.com Trophy could be an important moment in the club’s growth.

“I don’t think trying to win and having a will to win is a tap you can turn on and off,” Salford boss Alexander said.

“I believe you have to go into every single game representing your club in the best way possible and trying to win and putting everything into the game to try and win the game.

“We’ve approached each game in that manner. We’ve got this far by having that mentality and we’re not going to change going into this game.

“We know it’s a different challenge, we know it will be a difficult one, but we’ll go in with the same approach and give it our best to try and win.

“I’ve never heard anyone have a negative thought about playing at Wembley. Whatever level you play at, it’s a special venue, world famous.

“We’ve had the fortune of playing there last year in the play-off final and we know how memorable that was for us, so that for us is the target.”