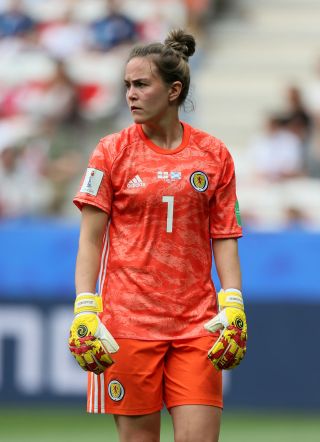 Scotland goalkeeper Lee Alexander is against the idea of smaller goals in women’s football and has pointed to the performance of Argentina’s Vanina Correa against England as a supporting case.

Keeping out a Nikita Parris penalty was among a number of impressive saves Correa made during her side’s 1-0 loss to England in their World Cup Group D clash in Le Havre on Friday.

Ahead of Scotland facing Argentina on Wednesday in Paris, Alexander said: “You look at performances like the Argentine goalkeeper and you can’t want to drop the goal height.

“It was an inspired performance. Probably the best goalkeeping performance at the tournament so far.

“She had a very good penalty save, did well during the game and deserved the plaudits.”

Chelsea manager Emma Hayes said in a column for The Times last Thursday that she believes “a debate about the size of pitches and goals in women’s football…is worth having.”

Alexander “completely disagrees” with the idea of smaller goals in the women’s game.

And the 27-year-old Glasgow City player, whose is 5ft 7ins, four inches shorter than Correa, said: “Genetics hasn’t given me that and I just have to make sure that I work harder on all aspects of my game.

“If you ask all the goalkeepers in women’s football, we work probably just as hard as the men in terms of our speed across the goal line and our plyometric jumps to try to get that top-corner save.”

Scotland, for whom this is a debut Women’s World Cup campaign, need to beat Argentina on Wednesday to have a chance of reaching the last 16.

It would leave them third in the group, and four of the six third-placed finishers will join the top two from each pool in the next round.

So far, Shelley Kerr’s side have suffered 2-1 defeats against England in Nice and Japan in Rennes. Both matches saw them concede twice in the first half, improve after the break and score in the closing stages.

“I think we have to feel confident,” Alexander said. “We have things to build on from our previous two games, albeit we’ve come away with zero points.

“I think our performances in the second halves have shown we have a desire to try to get back in the game, and we are creating opportunities. We are putting teams under pressure. We do know we have to start the games better.

“I think we have maybe given too much respect to the opposing teams, potentially.

“Obviously, they are top teams – England are ranked third and are out here to win the competition, and Japan have won it before (in 2011) and were runners-up in the last one.

“But put that aside, I think maybe we probably could have got closer to them and put them under a little bit more pressure. We found ourselves 2-0 down in both games so that is something obviously we’re looking to address.”