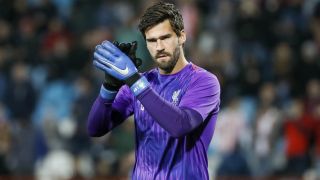 Former Brazil international Dida believes Alisson can continue his rapid rise and establish himself as one of the best goalkeepers in the world.

Alisson rose to prominence at Internacional in his homeland after inheriting the starting job from Dida, who has monitored his compatriot's development ever since they worked together.

The 26-year-old initially had to bide his time for first-team opportunities after joining Roma in 2016, eventually taking over as first choice for the Italian club at the start of the 2017-18 season.

Liverpool spent €72.5 million – a world-record fee for a keeper at the time – to sign him in July and Alisson has settled in quickly to life at Anfield, keeping seven clean sheets in 12 Premier League appearances.

"I like Alisson very much – I think he is a great goalkeeper," Dida told Omnisport.

"I had the opportunity of working with him at Internacional. I see his great development in football; going to Europe, playing for the Brazilian national team.

"I hope he can be what everyone expects of him, conquering many things here in Europe and establishing himself as one of the best goalkeepers in the world."

Alisson faces some tough competition in the battle to be seen as the top goalkeeper in the game, including from two Germany internationals who are vying for just one starting spot for their country.

Manuel Neuer has retained the faith of national boss Joachim Low despite coming under pressure for his place from Barcelona's Marc-Andre ter Stegen.

"Great goalkeepers, both of them," Dida said of the duo.

"They have shown great technique and ability, which means that Germany manages to remain with a high level in all competitions."