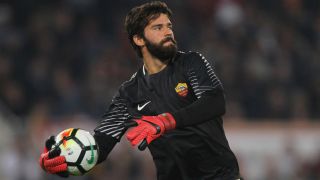 Liverpool have made their latest big-statement signing by bringing in Brazil goalkeeper Alisson from Roma for a fee that could rise to €72.5million.

Jurgen Klopp's side reached the Champions League final last term - at the expense of Alisson's former club in the semis - as the free-scoring Mohamed Salah swept the board in terms of end-of-season awards.

Virgil van Dijk arrived as a club-record signing in January and, following the captures of midfielders Naby Keita, Xherdan Shaqiri and Fabinho, Alisson becomes the most expensive goalkeeper of all time.

It is a long-held status the 25-year-old takes away from an all-time great, while Ederson's switch to Manchester City last year means Brazil's first and second-choice keepers now occupy spots one and three in the standings.

Here is the list in full, based on the most widely reported fees for each deal. Fluctuations in exchange rates have not been taken into account.