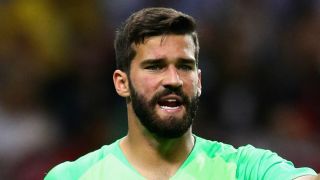 Paolo Di Canio has warned Liverpool not to expect Alisson to solve all their defensive problems next season.

The 25-year-old became the most expensive goalkeeper in world football when he joined Liverpool from Roma in a deal that could cost as much as £65million.

While Di Canio praised the Brazilian's qualities, he is not convinced Liverpool's defensive concerns will necessarily be solved simply by smashing the transfer record for a keeper.

Jurgen Klopp's side were the Premier League's second-highest goalscorers in 2017-18 on 84, but they conceded 38 – 11 more than title winners Manchester City – and Di Canio recalled similar patterns from the Reds during his own playing days.

When asked about Alisson's prospects at Anfield, the former West Ham forward told reporters: "He can reach great results in Liverpool but he needs to be careful because Liverpool used to concede a lot to their opponents.

Alisson's arrival at Liverpool came following Loris Karius' calamitous performance in the Champions League final, when he gifted Real Madrid two of their goals in a 3-1 victory for Zinedine Zidane's side.

Neither Karius nor his understudy Simon Mignolet fully convinced supporters of their credentials to be Liverpool's number one, and Di Canio said Alisson needs to buck the trend of imported goalkeepers struggling in England.

"I'm very curious to see him in the Premier League because lot of great goalkeeper just failed in England," said the former Lazio man.

"Alisson was great in his first season in Rome and now he still needs to show his qualities.

"He has the skills and the personality to become a world-class goalkeeper and he is also young and in a good shape."