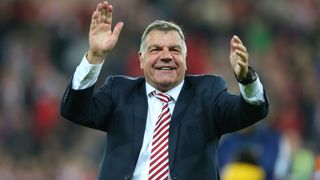 Sam Allardyce was in attendance for Sunderland's pre-season friendly at Hartlepool United on Wednesday amid reports he has won the race to succeed Roy Hodgson as England manager.

The Black Cats previously confirmed that boss Allardyce was in talks with the Football Association and speculation is rife that he is on the verge of landing the job with an announcement seemingly imminent.

Allardyce, however, turned up as normal for the game at Victoria Park, greeting supporters and signing autographs in an apparently cheery mood for the side's first pre-season fixture.

The 61-year-old has previously managed Bolton Wanderers, Newcastle United, Blackburn Rovers and West Ham in the Premier League, never having been relegated from the top flight.

Hull City boss Steve Bruce was also interviewed for the England job, while Eddie Howe and Jurgen Klinsmann were other rumoured candidates.

The role has been vacant since Hodgson resigned following the Three Lions' disappointing last-16 exit to Iceland at Euro 2016.