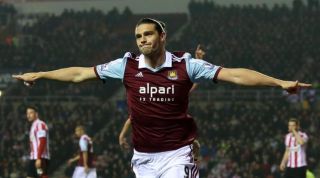 Carroll did not appear until January this season and has scored just twice since returning, form that has reduced his chances of being involved in England's FIFA World Cup squad.

But Allardyce thinks it is unfair to properly judge Carroll on his recent performances, insisting that the 25-year-old is not at his best yet.

Allardyce said: "He's not 100 per cent. He's had no pre-season at all, he's worked very hard, but getting into games at this stage of the season after so long out is hard.

"It's hard to get that ultimate sharpness that you need. Hopefully he can find it.

"He looked sharp when he came back. His enthusiasm and the energy from being so pleased to be back with us carried him through, but that catches up with you when you've been out for so long.

"A little bit of fatigue kicks in. We've got to work through it and hopefully he can finish the season by scoring a few goals for us."

West Ham sit 12th in the Premier League, seven points away from the top half after Saturday's 1-0 home defeat to Crystal Palace.

With just three matches left this season, a top-half finish is now highly unlikely, something that Allardyce believes would be different if Carroll had been fit for the entire campaign.

He does admit that West Ham need to find another avenue to goal, though, with midfielder Kevin Nolan the club's leading Premier League scorer with seven.

"What we need to do is find an alternative type of front man that scores a few more goals, we'll have to do that," Allardyce added.

"If Andy had been with us all season, we'd be top half, I'm convinced about that.

"I'm convinced the front man is the key to how you do in a season, and if we had Andy out on the pitch, match-fit and scoring the goals we know he can with Kevin Nolan, I think we'd be a lot further up the table than we are now."