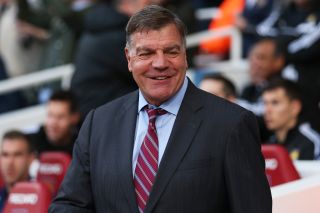 The 30-year-old, who was released by West Ham in May, re-signed for the Upton Park outfit on a short-term deal earlier this month and was an unused substitute during their 3-1 loss to Manchester City last weekend.

But Allardyce feels Cole could be ready to come off the bench at the Liberty Stadium, adding that he sees the former Chelsea man as an important presence in the dressing room.

"He's ready to be involved in the squad but I don't think he's ready to start from a match fitness point of view," he said.

"Carlton's experience, if needed off the subs bench, could be invaluable at the moment so he'll be in the squad for Sunday."

The ex-Newcastle United and Bolton boss also revealed that striker Andy Carroll is still some way from making his return.

Carroll, who joined West Ham permanently from Liverpool in a club-record deal in the close-season, is yet to feature this term due to an ongoing foot problem and has been completing rehabilitation work in Belgium.

"No, it's not true (that he has finished his recovery in Belgium) as he's still got a while to go yet," Allardyce added.

"We'd hope that he'd be back with us in the next two to three weeks and hopefully that would be a shout that he could start full training when he does come back.

"It's always been a week-by-week assessment, we send one of our physiotherapists out there every week to monitor his progress on a weekly basis."