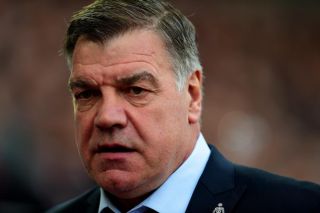 The midfielder has missed the last two matches with a calf problem, after playing every minute of West Ham's first five league matches.

Allardyce's men head to Lancashire seeking their third win in four matches, while Burnley are looking for their maiden victory of the campaign.

In a press conference on Thursday, Allardyce - who turns 60 on Sunday - revealed that Noble is in line for a potential return.

"He's back in training this week so hopefully he'll be ready for the weekend," he said.

"Having him back will be huge for us as he's been fantastic for us since my time here."

West Ham have strength in depth in midfield, with the likes of Alex Song and Morgan Amalfitano pushing for a starting berth, but Allardyce is giving little away when it comes to the weekend.

"I don't know if it's a given [for Noble to return], but these are the decisions you have to make as a manager," he added.

"Sometimes you have to disappoint players for benefit of the team, you can't play everyone.

"My duty as manager is to make sure the strongest team possible plays against Burnley on Saturday."