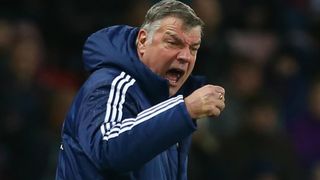 Allardyce believes managers will be forced to rest players for the FA Cup third round this weekend because of the hectic schedule.

Every top-flight club will play in the FA Cup this weekend, before then facing midweek league fixtures just days later.

"If you want us to respect the FA Cup then you don't put a Premier League fixture there, do you?" Allardyce said.

"Why put one in there? We've got the rest of the season after that and we've just done six games in 24 days. We're flogging the lads.

"It's a game to be enjoyed, not a game to be destroyed and we destroy the game by asking the players to do too much in this period. It's a fact.

"Injuries are more and more apparent every year, but it's completely ignored by the Premier League and they fit a fixture in during midweek after the new year. It's diabolical, it really is."

Allardyce's anger has also stemmed from Swansea City being granted a request to switch their league fixture against Sunderland from Tuesday to Wednesday, giving the Stadium of Light club a shorter turnaround before their trip to Tottenham on January 16.

"And to then put it back by a day is even worse. It’s just unbelievable, but there you go," he added.

"For me, from a professional point of view, look at the circumstances and if you can explain to me, [Premier League executive chairman] Richard Scudamore has my number, he can ring me up any time he wants, but he won't."