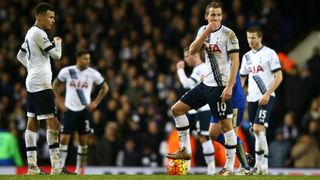 Sunderland manager Sam Allardyce has backed Tottenham to secure Champions League football, but doubts they have the mental steel to win the Premier League.

Allardyce will be seeking to lead Sunderland clear of the relegation zone with victory at White Hart Lane on Saturday, but knows he is facing a very tough opponent.

The Sunderland boss said the hardest title to win was always the first one and he questioned whether Mauricio Pochettino's squad had the experience to prevail.

"Brendan Rodgers couldn't hold his nerve with Liverpool to win the title a couple of years ago," Allardyce said.

"When they needed to be resilient, or hold on to the result they've got, they didn't quite do it and that can be that lack of experience which you need in order to win a title.

"Listening to my old mentor, Sir Alex Ferguson, the hardest one to win for your players is always the first one and particularly when your players are as young as Tottenham's."

But Allardyce said it would be good for the league to see a team like Tottenham win the Premier League and break the dominance of the likes of Chelsea, Manchester City and Arsenal.

"It would be nice if they did or got around there, but I think their main aim is to finish in the Champions League and if the title came around that would be one of those seasons they dream about," he said.

"It would be great if Leicester and Tottenham finish in the top four.

"When you think about what Leicester have achieved and what they have achieved this week against Spurs, I don’t think you can write them off either.

"Because Chelsea have slipped up big style this year, it's a perfect opportunity for a Tottenham or a Leicester or for whoever else is in and around that area."