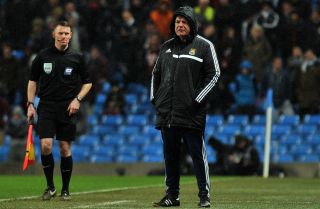 Just three days after being dumped out of the FA Cup with a 5-0 loss at Nottingham Forest, West Ham shipped six at the Etihad Stadium in the first leg of their League Cup semi-final on Wednesday.

The result leaves the Londoners needing a miracle to reach the final at Wembley, but Allardyce claimed there was little his side could do against the talent that City have in their ranks.

"We knew that they had to have an off night and we had to have a really good night from our point of view," he told Sky Sports.

"Manchester City's finishing was just outstanding - never mind the build-up play - and (we have) got a struggling defensive unit at the moment, because of our injuries.

"We're in a bit of a hole at the moment and we have to dig ourselves out.

"It's not like they haven't done it to anyone else. We tried our best but it wasn't good enough against a side that have outstanding players because they spend outstanding money."

Allardyce, who received a vote of confidence from his co-chairmen following the defeat to Championship outfit Forest, is without the likes of Andy Carroll, Winston Reid, James Tomkins and James Collins due to injury.

And with such absences, Allardyce said he had little choice but to "take it on the chin".

"Sometimes you've got to take it on the chin. Face the facts - they have got a miles better squad than us.

"We want our best team out on the field but we haven't got that at the moment."