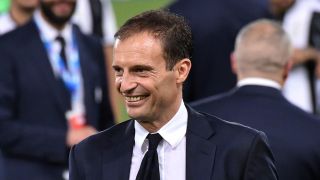 Massimiliano Allegri's spell at Juventus is "absolutely not over" according to director Beppe Marotta, who insisted the club is aiming to retain the head coach's services for next season.

Ahead of the clash between Juventus and Crotone, in which a victory for the home side would secure them the Serie A title, Marotta called upon Allegri to "evaluate the situation" as he approached the end of his third successful season in Turin.

The 49-year-old was appointed head coach in July 2014 and his current contract expires at the end of the 2017-18 season, but reports have linked Allegri with a move away from the club throughout a campaign that has seen Juventus win the Coppa Italia and reach the Champions League final.

Marotta praised Allegri's achievements and insisted that the decision rested in the coach's hands, telling Mediaset Premium: "Allegri deserves all the praise and attention, because he arrived amid scepticism and instead proved himself to be a great professional.

"We've said many times that we are happy to continue with Allegri. He is the one who must evaluate the situation, but we have every reason to continue and his era at Juve is absolutely not over."

Marotta indicated that the club would work hard to keep hold of coveted talents, such as Leonardo Bonucci and Paulo Dybala, whose performances this season have attracted attention from Europe's top clubs.

"The transfer market is not just about buying champions, but also not selling them," said Marotta. "Juventus do not sell their champions.

"We are protagonists in all three competitions, so going all the way means using up a lot of energy and needing to rotate the squad.

"The important thing is to be out front at the end. We are truly close to the finish line and we welcome the next challenge."