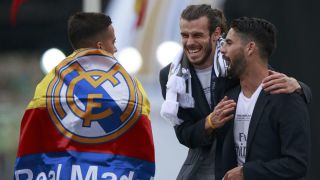 Juventus coach Massimiliano Allegri is happy to deal with either Gareth Bale or Isco in the Champions League final, regardless of which Real Madrid star Zinedine Zidane opts for.

Isco has enjoyed a fine season for Madrid while Bale has struggled with form and fitness, but the Wales international is expected to be available for Saturday's showpiece match in his home city of Cardiff.

But Allegri insists his side are equipped to deal with either player and there are benefits to facing their varying approaches.

"We have talked to the team [about the different options]," the Juve coach told a pre-match news conference.

"If Bale plays, he's very fast, he has great speed and, in an open field, he is devastating because in three passes he gets the ball to the other side.

"Isco plays inside the pitch. He is less predictable than Bale, but, at same time, Real Madrid lose a bit of order in the defensive phase."

Bale has netted two Champions League goals this season, Isco has scored once.