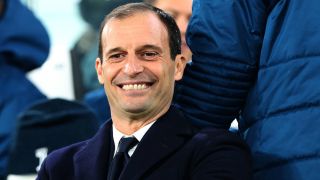 Massimiliano Allegri said he is not thinking about his future as the in-demand Juventus head coach prepares for end-of-season talks amid Premier League links.

The rout secured a fourth successive Coppa Italia triumph, with Juventus also on the cusp of a seventh straight Serie A title, which would be Allegri's fourth consecutive Scudetto in Turin.

And Allegri – who is under contract until 2020 – preferred to focus on another triumphant occasion for Juventus amid the ongoing speculation.

"I'm not thinking about my future. I have a contract with Juventus and as we do every year at the end of the season we will meet up to discuss the future of the club," the 50-year-old told reporters post-match.

"Every year Juventus manage to build up a very competitive group of players with the aim of keep winning.

"When you sit down talking you need clarity of mind to analyse what worked out and where you need to improve. We will do this with Juventus management.

"I work for one of the best clubs in the world, we are doing important victories year after year and keep winning is always difficult."