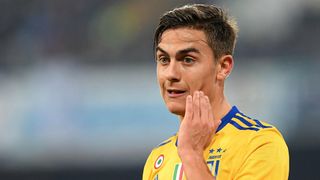 The Argentina international's failure to find the net in his side's final Group D fixture means he is still yet to break his duck in this season's Champions League.

Dybala's goals have also dried up domestically. While he started the season with a sensational run of 10 in his first six Serie A games, he has only managed two more since.

However, speaking after the Italian champions qualified for the last 16 in Europe on Tuesday, Allegri insisted he is not concerned by Dybala's form.

"It's a bad period for Paulo [Dybala] but certainly he has to remain serene because none of us are worried, we are sure he will return to his standards very soon," the Juventus manager said, according to UEFA.com.

"He just needs to keep training as he is doing."

4 - Juventus have reached the Champions League knockout stages in each of their last four campaigns in the competition. Routine. December 5, 2017

Juan Cuadrado did find the net against Olympiacos, the Colombian tapping home Alex Sandro's low cross to give the Serie A side a 15th-minute lead in Piraeus.

After El Fardou Ben Nabouhane hit the crossbar for the hosts in the second half, substitute Federico Bernardeschi sealed Juve's victory with a curling finish in the 90th minute.

"In Europe, it's always difficult to win games, that's why we had to kill the game when we had a couple of good opportunities soon after taking the lead," Allegri said.

"We had to keep possession better in the second half but to do so we had to run more without the ball.

"When you lose possession to easily you always offer opponents opportunities to attack you and this is what we did in the second half."

Juventus' first road win in European competition this season secured second spot in the group behind Barcelona, meaning Sporting CP had to settle for a place in the Europa League.